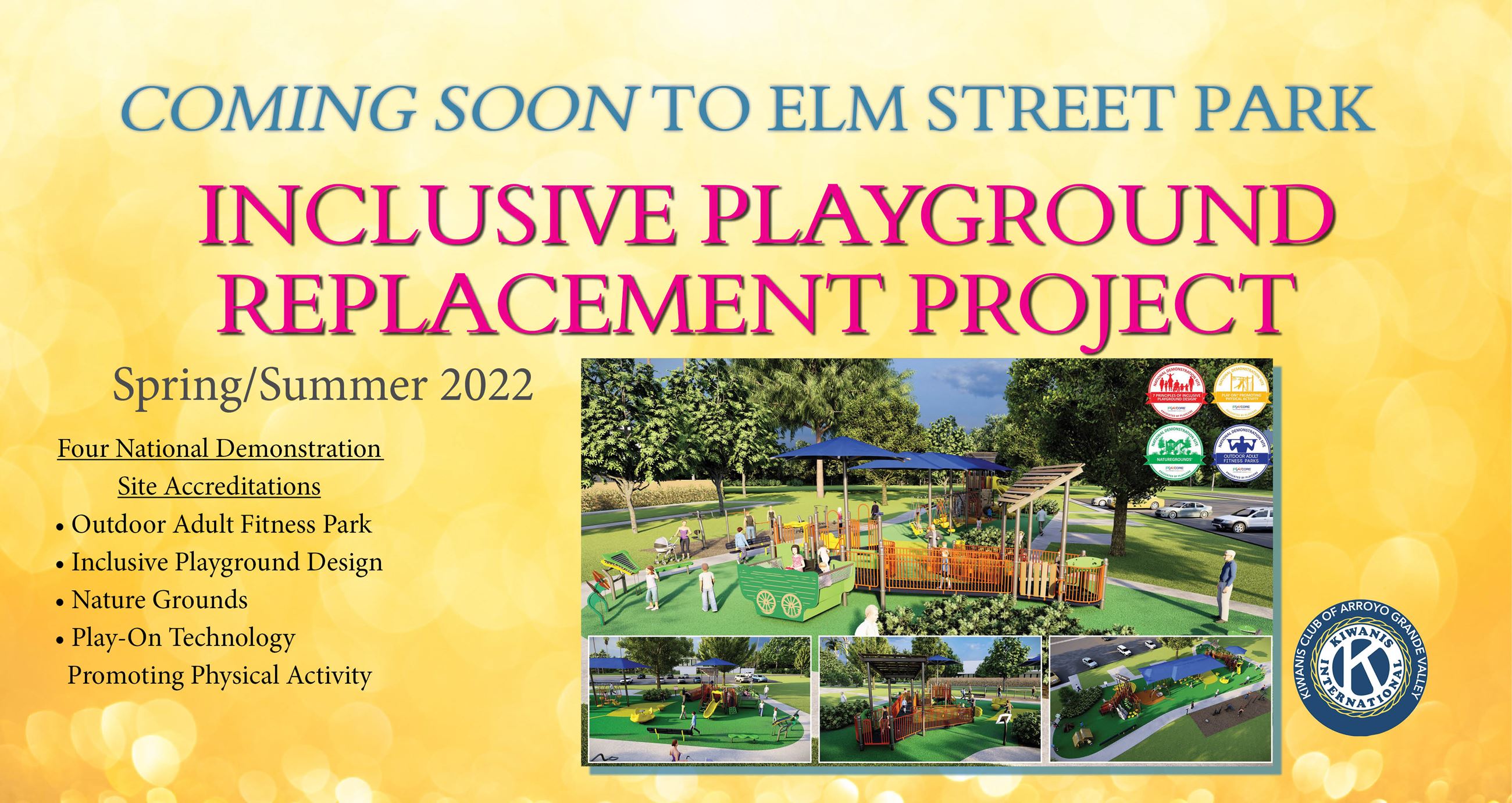 The City of Arroyo Grande's Recreation Department, in partnership with the Arroyo Grande Valley Kiwanis Club, is proud to announce the Inclusive Elm Street Park Playground Replacement Project. This inclusive project will replace the current Elm Street Playground and is planned for renovation in the Spring/Summer 2022.

On June 5, 2018, California voters approved Proposition 68, the “Parks and Water Bond Act of 2018” (Senate Bill 5). A number of grant programs for drought, water, parks, climate, coastal protection, and outdoor access are being supported with Proposition 68 bond proceeds. One is the “Per Capita Program”, which provides $185,000,000 to cities and counties statewide for local park rehabilitation, creation and improvements on a per capita basis, with a minimum award of $177,952. Under this program, grant recipients are encouraged to utilize awards to rehabilitate existing infrastructure and to address deficiencies in neighborhoods lacking access to the outdoors.

In March of 2019, the State of California released the Per Capita Grant Program, awarding counties and cities funding for eligible projects based on population. In October 2019, the Arroyo Grande City Council adopted a resolution to submit a grant application, which would have been due mid 2020. However, due to COVID-19, the grant application deadline was extended to December 2021, allowing more time for community involvement.

After receiving input from three community forums regarding the potential for grant funding, community comments and suggestions were incorporated and a design for the replacement of the playground at Elm Street Park was crafted. At the October 26, 2021 City Council meeting, the Council unanimously voted to approve the Inclusive Elm Street Park Playground Replacement Project design and allocated additional funding needed to complete the project. After the City Council's approval, the Prop 68 Per Capita Grant program application was submitted and approved for $177,952. The playground equipment has also since been purchased and is expected to be installed in the Spring/Summer of 2022.

To find out how you can become involved and contribute towards this project (public art, interpretive education, funding for the NatureGrounds components), contact the Recreation Department today! To learn more about the history of the project, view the City Council agenda summary, item 11a: https://pub-arroyogrande.escribemeetings.com/Meeting.aspx?Id=8df6dbda-6962-4fef-87cd-22730c955684&Agenda=Agenda&lang=English&Item=42&Tab=attachments